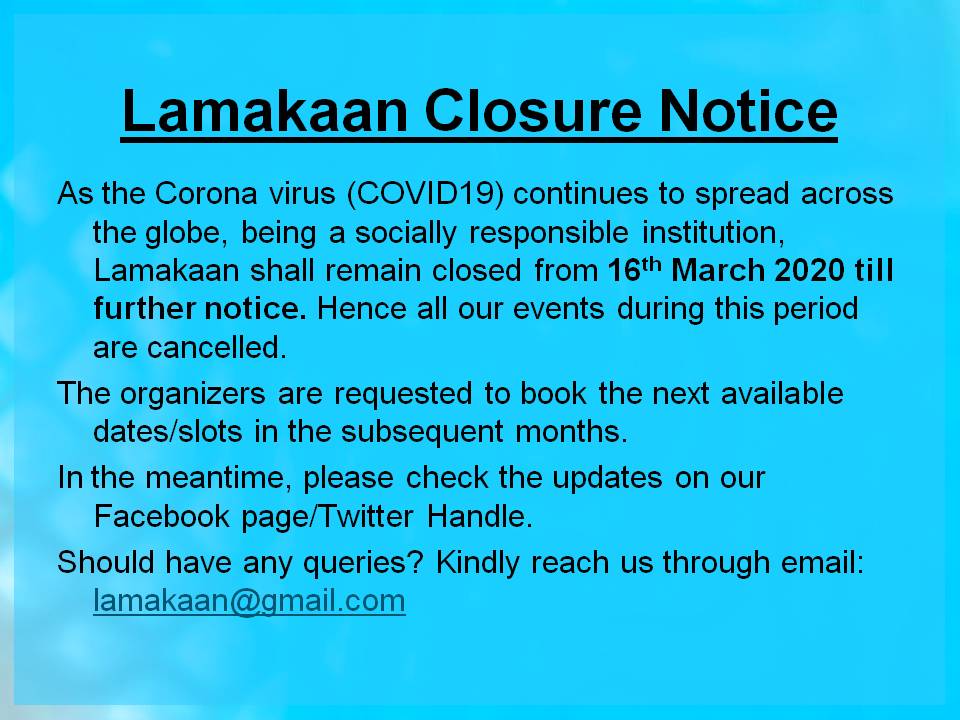 Kisi Aur Ka Sapna
Play0.5 hrsMarch 05, 2020 8:00 pm Thursday
SUTRADHAR Presents ‘KISI AUR KA SAPNA’ Written by Dr. Nand Kishore Acharya Directed by Shahrukh Surani It is the story of five actors rehearsing a script found in a garbage bin. The play traverses through different eras in history and politics, using the journey to display the various shades of a theatre actor’s life. The conflict between acting and reality, different interpretations of an idea, ‘does a script really need an actor?’ etc are just some of the issues the play deals with.

Organizer
Sutradhar
About the group: Sutradhar has committed itself to work with and promote home-grown talent. Towards this end, we’ve been organizing acting and voice workshops, and have trained close to 300 individuals in the last 18 years. Sutradhar is a theatre group, casting house, voice & acting school, and a production company rolled into one. It’s a talent-hub for actors, voices, scriptwriters and technical crew. Sutradhar has been involved with more than 50 plays and 150 shows in Hyderabad, with performances in cities like New Delhi, Kolkata, Ahmedabad, Bangalore, Chennai, Bhopal, Mumbai, Pune, Indore, Lucknow, Allahabad, and Rishi Valley School among others. Internationally Sutradhar’s founder Vinay Varma has performed in Abu Dhabi and London. In fact, a major part of credit for generating interest in theatre amongst the Hyderabadi audience goes to Sutradhar. All our shows are ticketed and that remains our only revenue. Some of Sutradhar’s well-known productions in the past have been Andhon ka Haathi, Kisi Aur Ka Sapna, Sayyan Bhaye Kotwal, Hai Mera Dil, Neem Hakim Khatar-e-Jaan, On Vacation, Main Rahi Masoom (based on the life and times of Dr. Rahi Masoom Raza), Sonata, Godse – An Assassin Speaks, Sita Apaharan Case, Siyaah Haashiye, Ismat – Ek Aurat, Birjees Qadar Ka Kunbaa, Biriyani aur Haleem, Agnes of God, Kanjoos Makkhi Choose, Oleanna, Andhere Mein among others. Sutradhar regularly conducts Acting and Voice Workshops and doubles up as Casting Director, regularly outsourcing Actors and Voices for films, television, corporate films, documentaries, etc. To know more about Sutradhar, please log on to www.sutradharactors.com.

Bazm e Sukhan is a weekly gathering of those interested in Urdu literature. A bunch of 20 odd people meet every Wednesday at 5 pm at Lamakaan and discuss Urdu poetry and prose. Each session usually focuses on one poet, or writer or a particular aspect of the form, structure or grammar of Urdu writing

Lamakaan is an open cultural space of Hyderabad that organizes events on various political, social, economic, and cultural issues. For more info about lamakaan and its events, visit us at www.lamakaan.com

Wait, what is a zine? Zines are a DIY form of self-publishing that we hope to explore further with you this Tuesday!

Who are we? Devashree Somani and Riya Behl are recent graduates of Ashoka University, currently engaging in the development sector. We will be speaking Hindi and English during this workshop.

What will we be doing? As young people, who are on the journey of finding our voices in a country struggling to uphold the values of a democracy, we would like to democratize the process of making art with you. The focus of this workshop will be ‘Hope in struggle’. We will go over the history and technique of making zines following which, participants will start working on individual zines.

At the end of the workshop, we will make photocopies for each other to swap – in original zine-style that removed money from the exchange of ideas – and hopefully, keep sharing through this form.

Participants are required to: – Think of a concept or narrative for the Zine – Carry A3/A4 paper(s) that will be your canvas. We encourage re-using paper, so it could be any old paper with one side blank. Please remember to bring photographs, news clippings, anything you might want in your Zine. – Carry any other stationery like scissors, glue, stickers etc., that you wish to use. – If you have made zines before or have them at home, bring them along too. It will confirm for first-timers that what you can include in a zine is only limited by your imagination! – Carry yourselves, and on time!

Devashree Somani and Riya Behl are recent graduates of Ashoka University, currently engaging in the development sector. Riya folds anything that can be folded into a zine. She has been lucky to be a part of zine-making workshops with other crafty, curious zinesters in Delhi, Chennai, and Mumbai; she is eager to create in Hyderabad too! Devashree is a long-time fan and beginner level zine-maker. She is excited to share a space of solidarity and creativity.

The content of the play deals with the subject of Urdu and its social relevance. Few characters are symbolic like “Ghazal” appears and introduce her contribution. Another Character “Bharat Mata” concludes that Urdu is my child, born and brought up in India. A clear message of national integration. Similarly, a film maker, Rap song lover add humor. One negative roles who take money from govt but never support language-cause. One humor spicing politician share lot of humor. One “ZabaN Dost” takes lead and suggest that every language should flourish with Urdu. It’s based on humor, satire and literary dialogues.

Ritu has done research on the coverage of Islam in the post ISIS Germany by the newspapet sites She has been doing research on use of social media during the protests in Kashmir. She has been looking at how Social Media has been trying to decoding the role played by social media in fomenting religious hate in the present day world. She would prepare a ground for a brainstorming session in countering the online hate by outlining the scenario and the movements going on across the world to deal with hate online.

Do you want to share and listen to music, talk about it, understand and appreciate it better?Then you can join us Last Thursday’s of every month, at 6:30 pm at Lamakaan. It is an informal group with no restrictions on entry. Drop in on 27th February. This month, Aradhana Karhade, the famous khayal singer will breakdown a Chhota Khayal. Explain the nuances with examples. 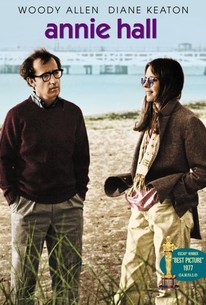 Alvy Singer, a divorced Jewish comedian, reflects on his relationship with ex-lover Annie Hall, an aspiring nightclub singer, which ended abruptly just like his previous marriages. 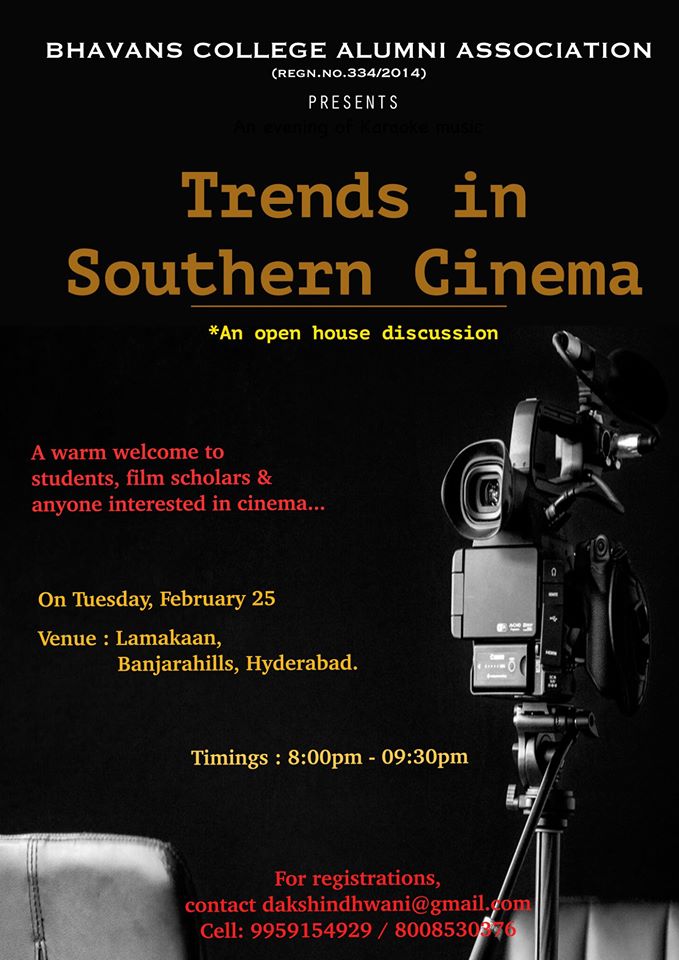 It has been a roller coaster 21st century for south Indian cinema in the first two decades of the millennium. We media students of Bhavan’s College of Communication and Management would present a discussion on the ebbs and tides the four southern film industries have faced. This is proposed to be the first of a series to be held every month which is aimed at being informative and comprehensive. Entry is free for all cinema lovers irrespective of age and gender.

This session is a discussion on the recent citizenship notices by UIDAI to 127 people in Telangana. We will be discussing the role of UIDAI in NPR and NRC.